Thomas Geiger
The Dematerialization of the Arts (for Kids)


In her essay The Dematerialization of Art, Lucy Lippard presented evidence that art might be entering a phase of pure intellectualism, the result of which could be the complete disappearance of the traditional art object. The text grew out of the preceding decade of conceptual art, which often left behind only ephemeral, relics, or no relics at all other than perhaps recordings of experiences. Conceptual artists were devoted to making ideas the central focus of their work, and many argued convincingly that the objects artists make in order to express their ideas are nothing but waste products. Sure, but how to explain this to your kids? Thomas Geiger’s version brings Lippard’s thoughts into a poetic and yet easy to understand narration.

Thomas Geiger
Peeing in Public
An inventory of the wildest urinators.


Peeing in public is a battle, played out on fields economical, political, technological and sexual. Moreover, it is one battle fought continuously within sphere of gender; gender equality, gender identity and gender-based violence. The question of when, where and how is certainly a preoccupation for all kinds of people. These range from the Roman Emperor Vespasian, who discovered that there is money in urine; to Xi Jinping, who announced the Toilet Revolution; or Hillary Clinton, who upon returning late to a televised debate, simply stated “well, it takes women longer”.


With the exhibition Art in Public Space, Langenhagen, Kunsthalle3000 brought sketched memories of inhabitants of the city of Langenhagen together. In June and July people in the streets of Langenhagen were asked to sketch a sculpture or art intervention within the public space in Langenhagen. The exhibition at the Kunstverein was slowly filled with these sketched memories and created a collective, visual memory of the vivid history of art in public space in Langenhagen. The publication Kunsthalle3000–Chronicles keep these memories alive and distribute them.


“… A loose brick on the sidewalk might ‘ordinarily’ look random and displaced. However, they have within them hidden properties that can be activated: construction workers set them up as barriers, street vendors use them as weights for their products or pile them to sit on. As the day quietens down the stones are left behind; sometimes just randomly, othertimes carefully stored on a corner. What I couldn’t help but see were a never ending series of potential sculptures—performed daily as a result of practicalities that shift with each changing user. …” 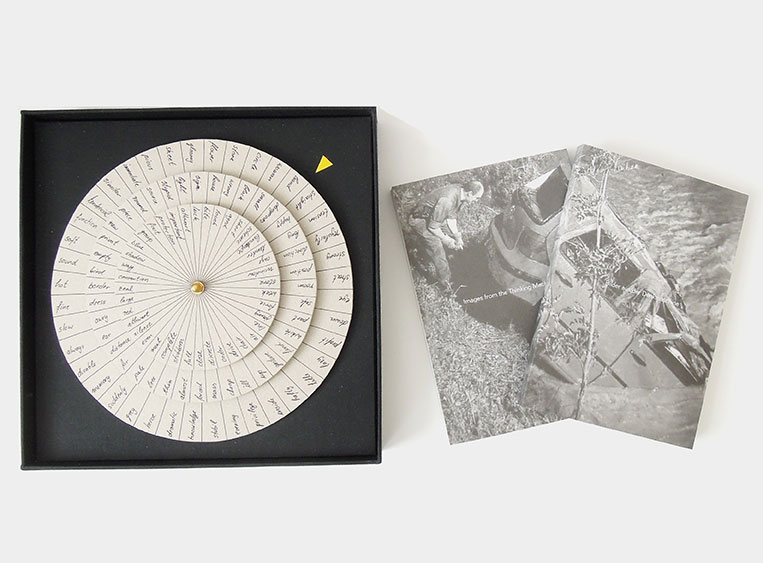 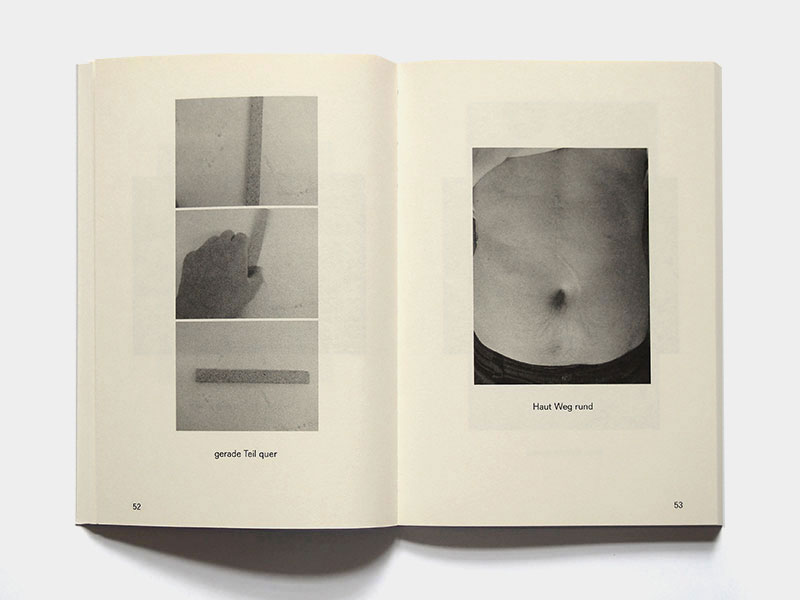 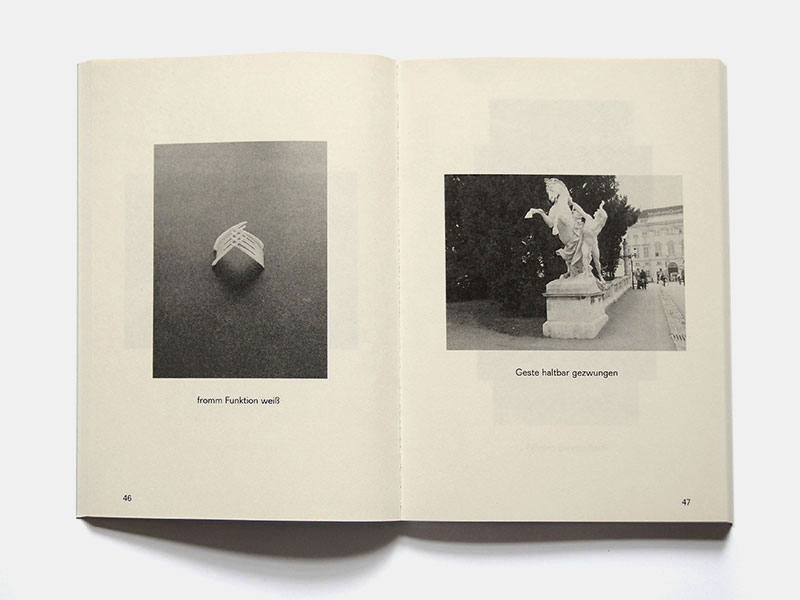 
This book is a collection of Thomas Geiger’s Images from the Thinking Machine. On 160 pages texts, fotos and video stills give an overview of his daily practice:

“Thinking Machine, this is what I call my construction of three revolving discs with about 50 adjectives and nouns each. Since 2008 I have been spinning the discs regularly before leaving the house. The resulting combination of words stays with me throughout the day and thus serves as a basis for my visualization in either a photo, an action, a video or the description of a situation.” 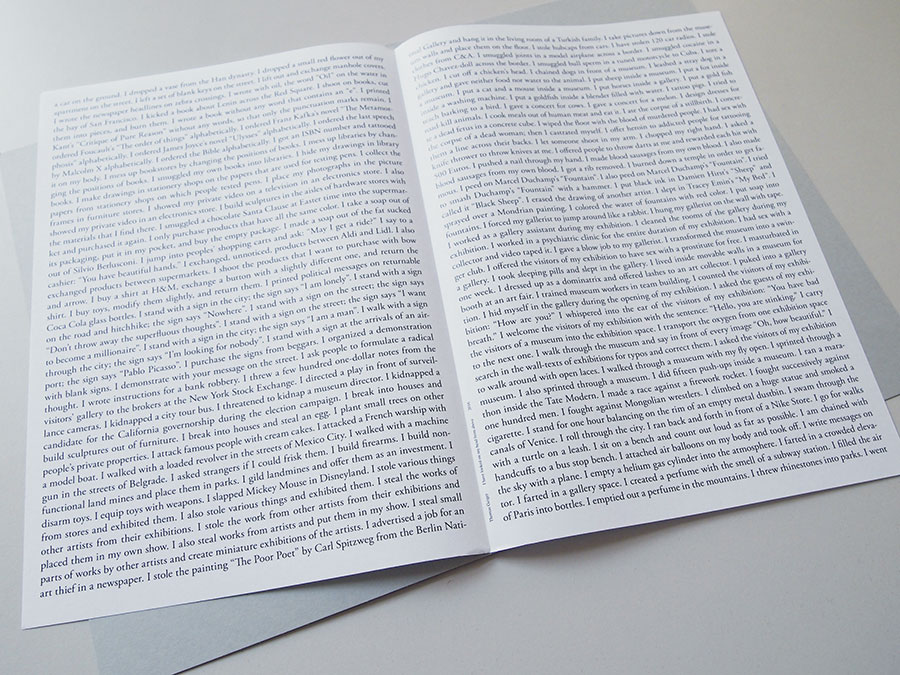 
“I cleaned the street. I cleaned and disinfected a street corner. I highly polished a subway rail. I paint balustrades in public space. I weed traffic islands. I clean street signs. I refurbish zebra crossings with white paint. I cleaned a public trash can. I restore holes in house walls with Lego stones. I plant trees in front of advertising panels …”

Behind the associative sequence of short sentences written out of the First-Person-perspective a inventory is hidden with conceptual-narrativ works from several decades of art history. 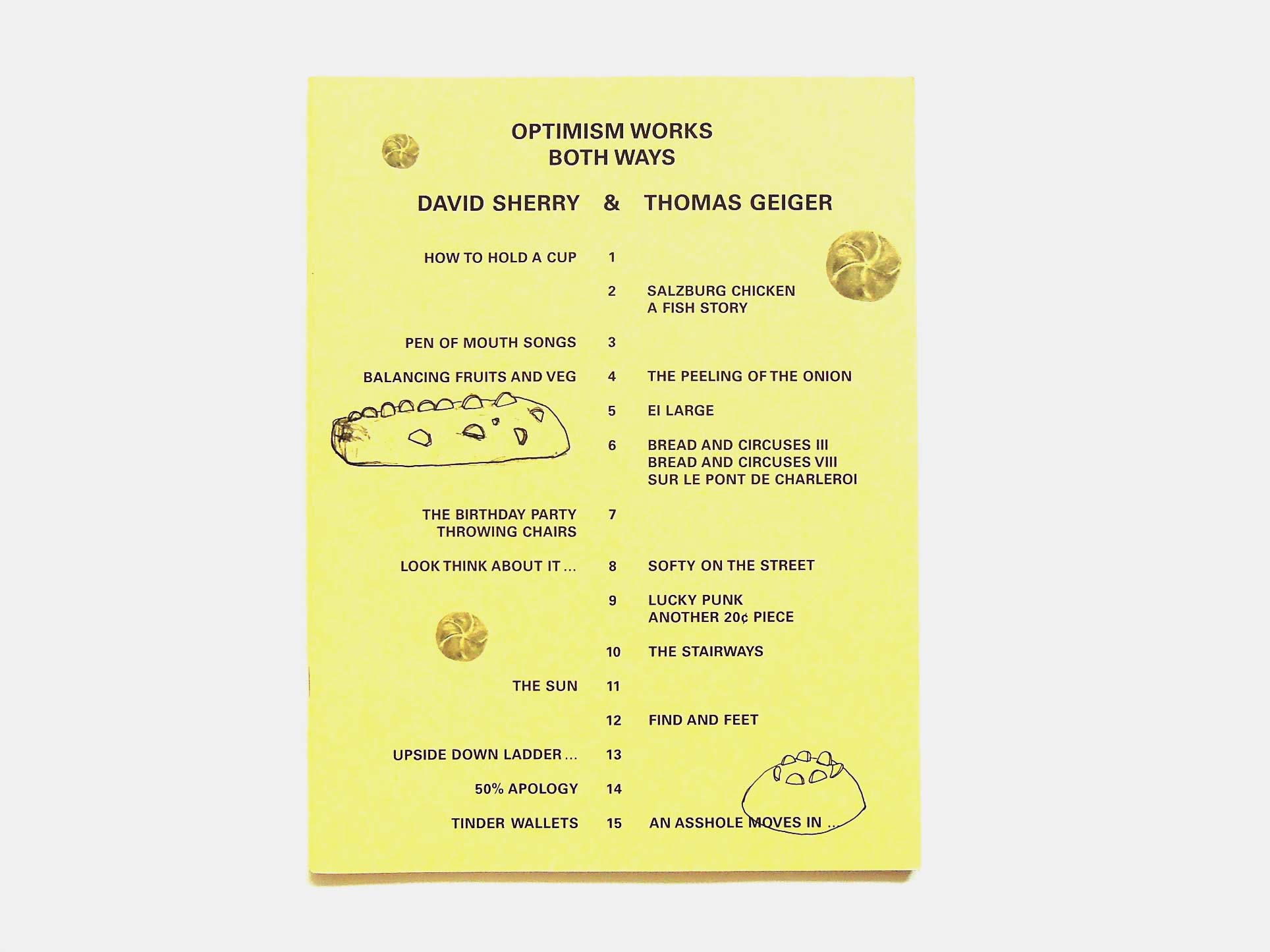 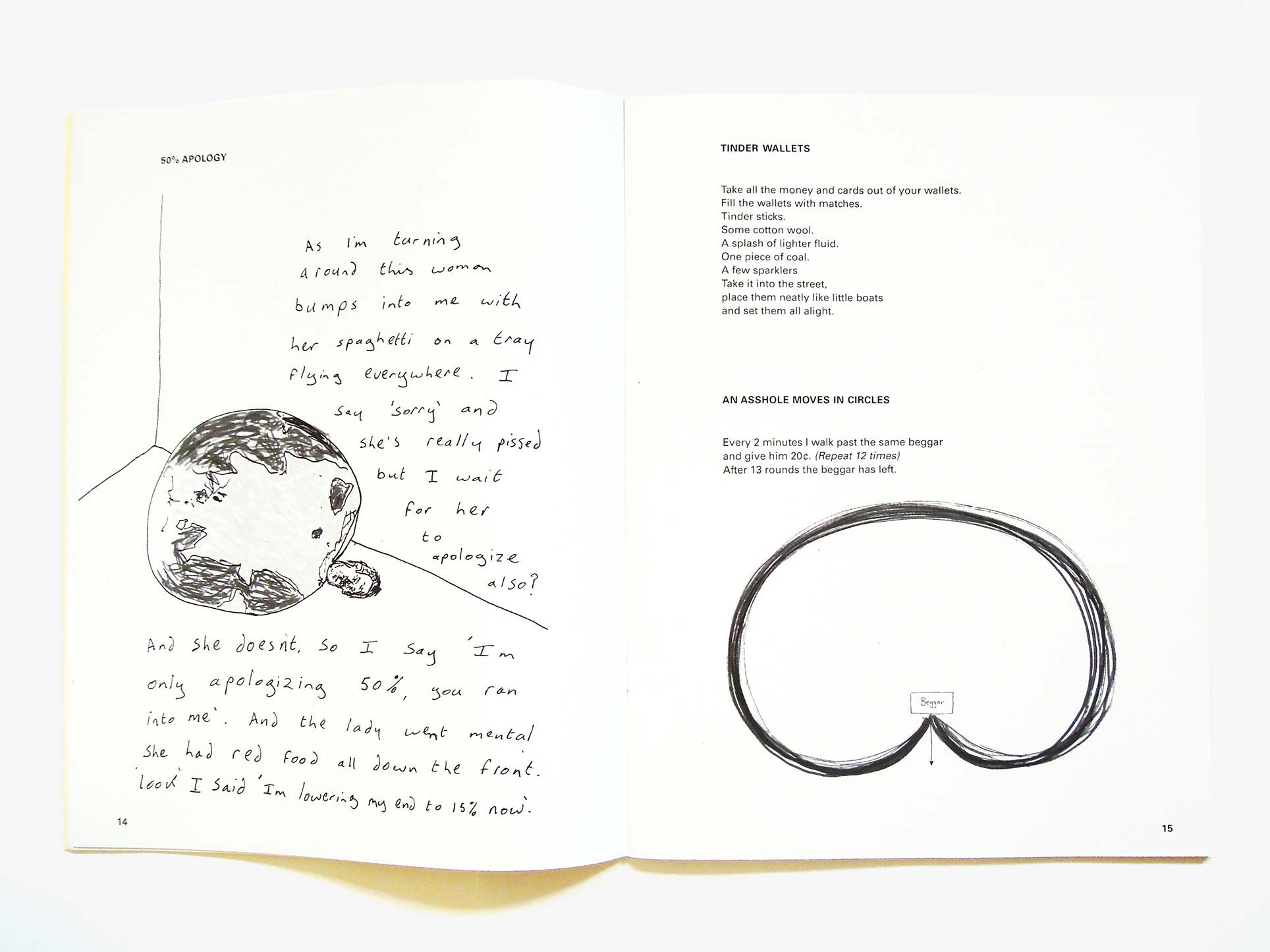 
Optimism works both ways, is a manual of performance ideas, drawings, scripts and plans, to be used for future projects. The collaboration incorporates a wide variety of different approaches, from re-enactments, static durational-sculptures, readings, actions, sound works and diary accounts. Many of the works in the book are starting points or sketches to be developed and explored as a live performance. 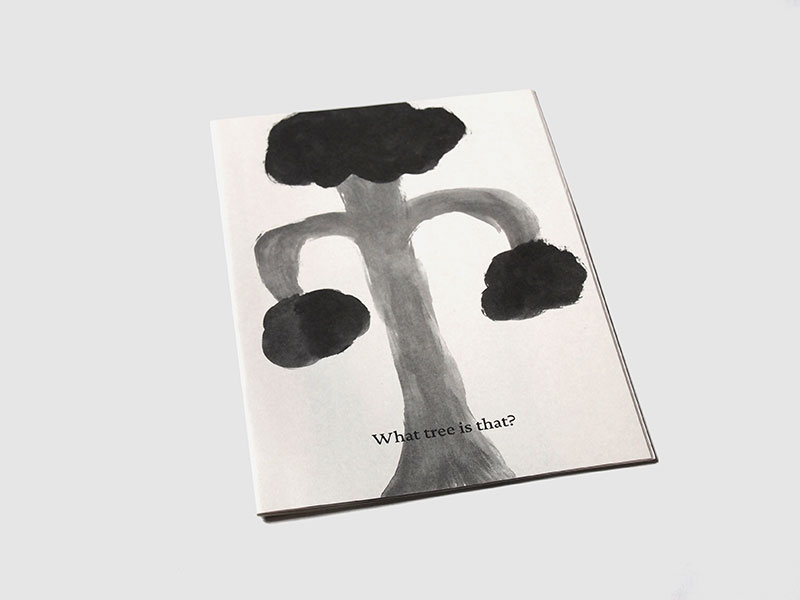 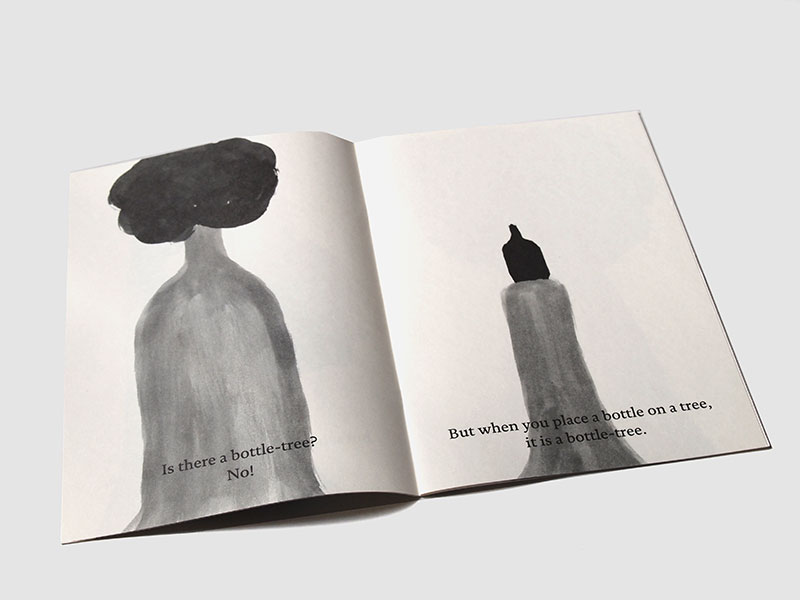 Thomas Geiger
What tree is that?


This publication tells us a story about two children who were talking about trees during a train ride: 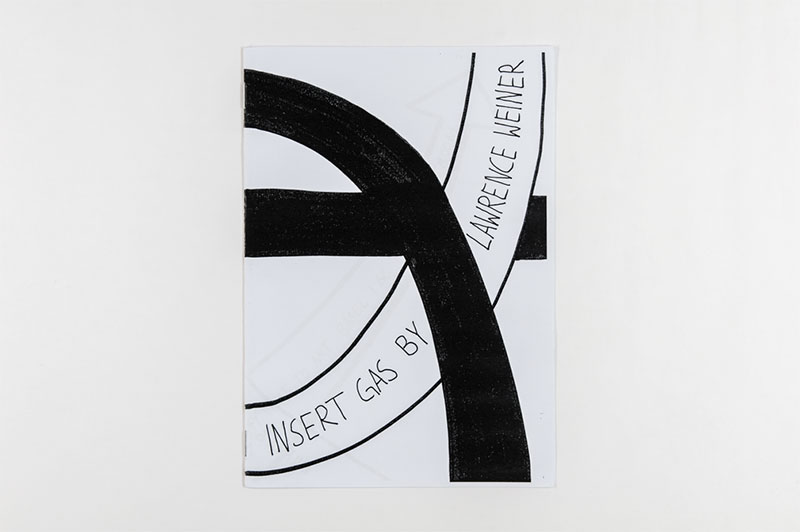 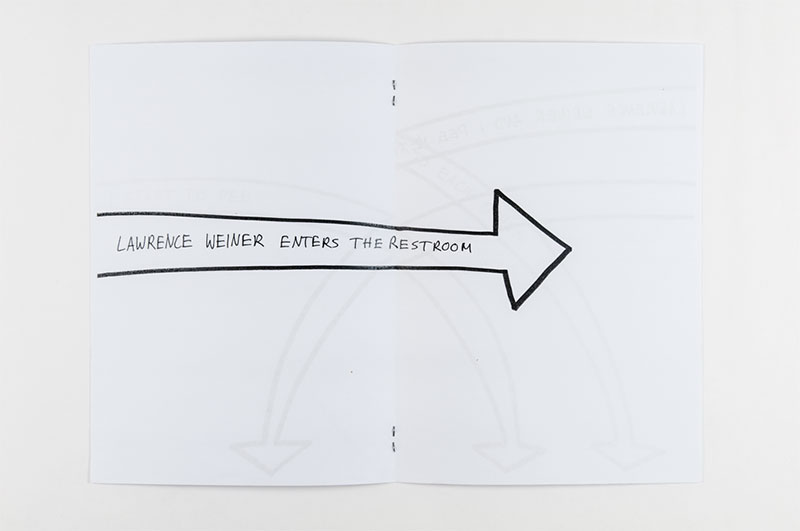 
In this booklet Thomas Geiger narrates of an encounter with the famous conceptual artist Lawrence Weiner:

“During my visit at Art Basel I go to the restroom.
I sart to pee.
Lawrence Weiner enters the restroom … ” 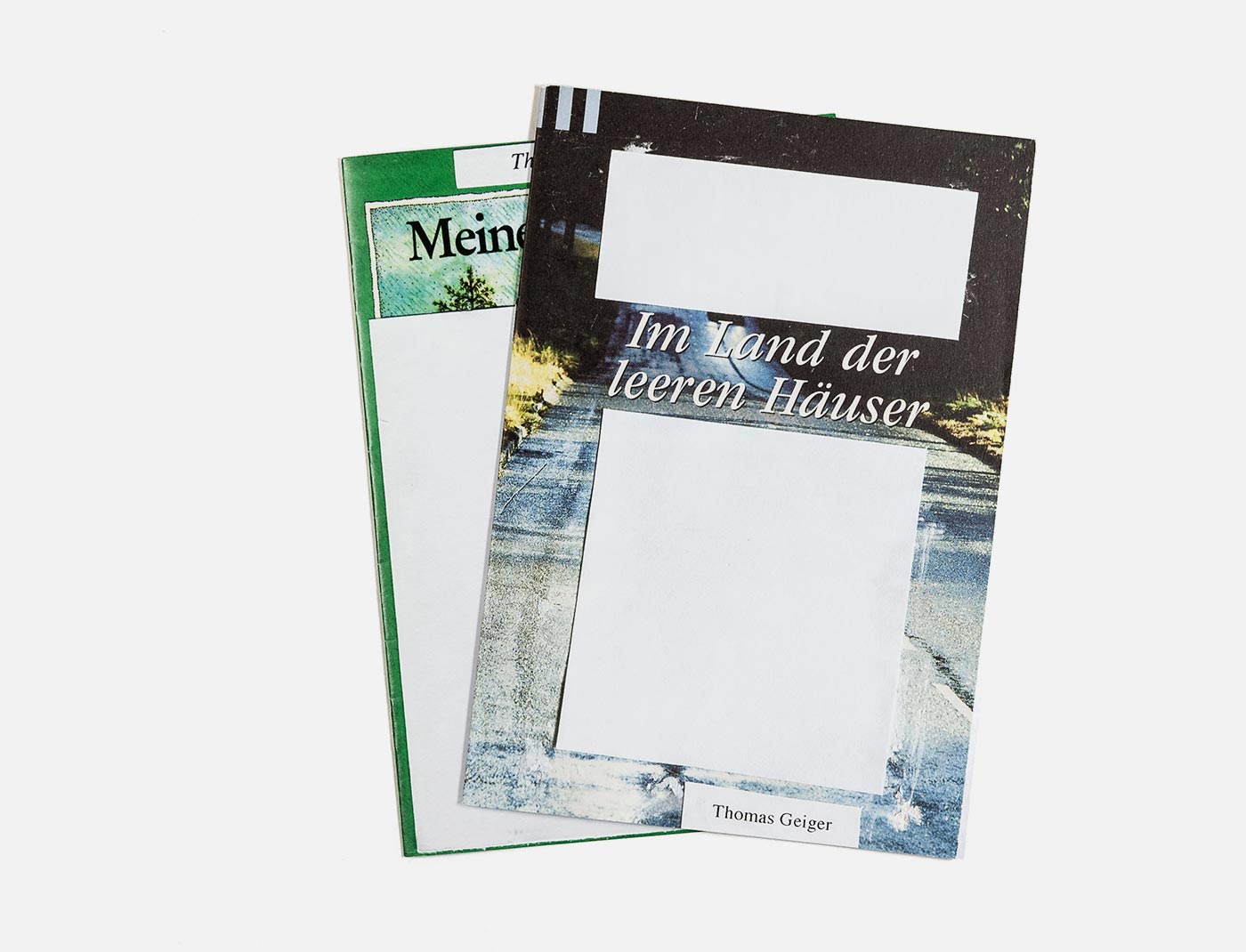 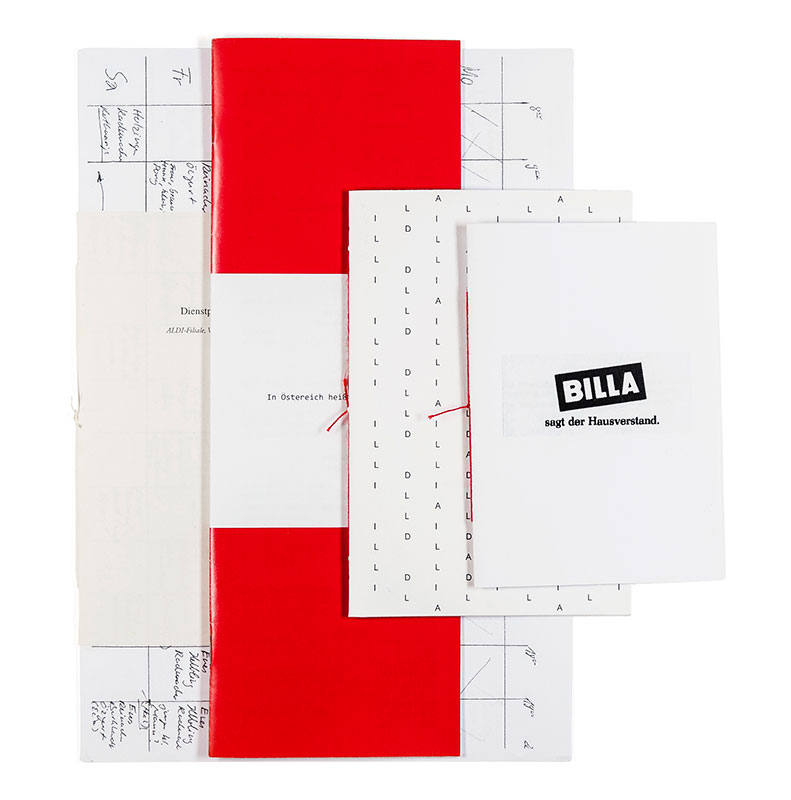 
Collector Box with all publications, Edition of 10 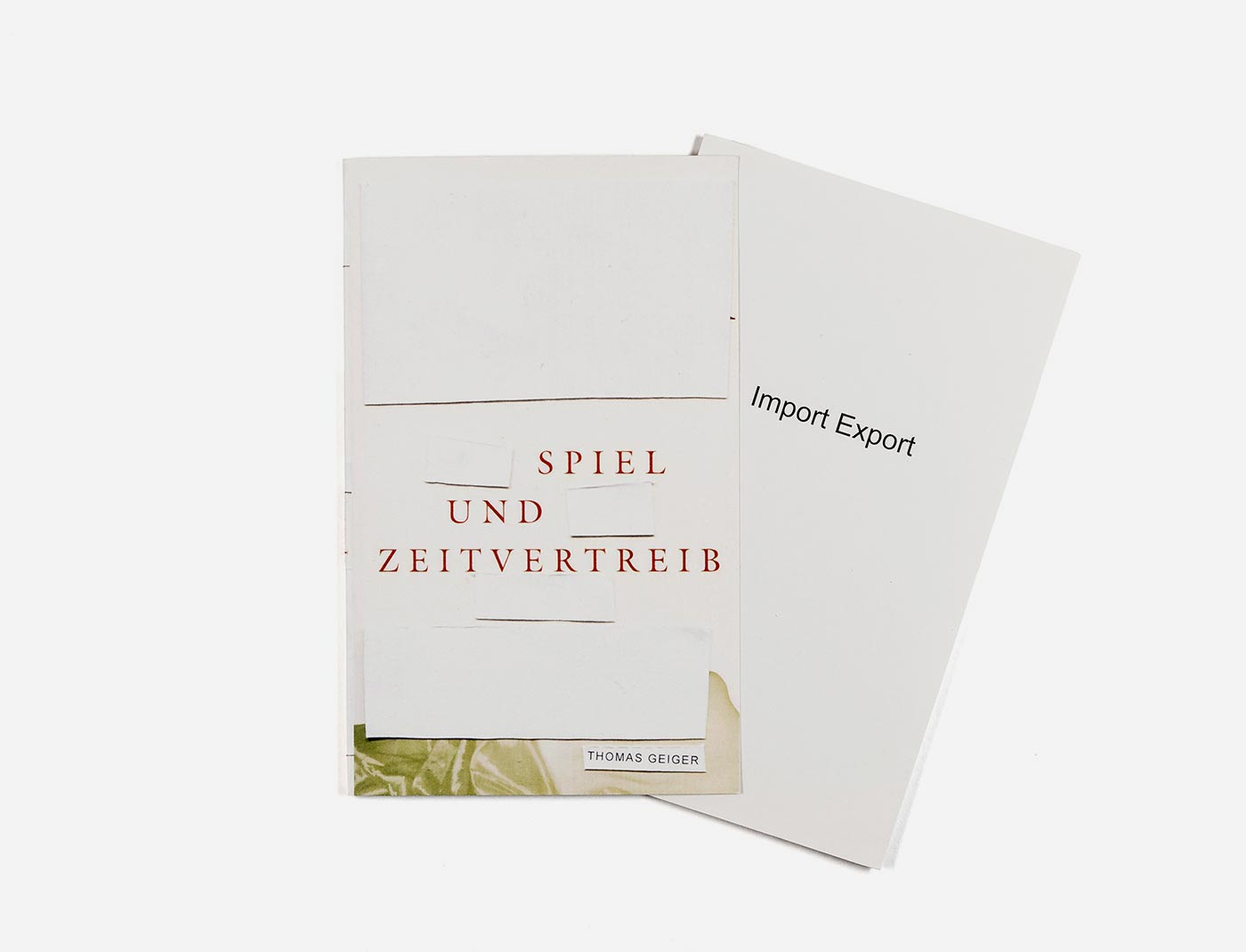 
Two publications which document Geiger’s actions in the book stores. 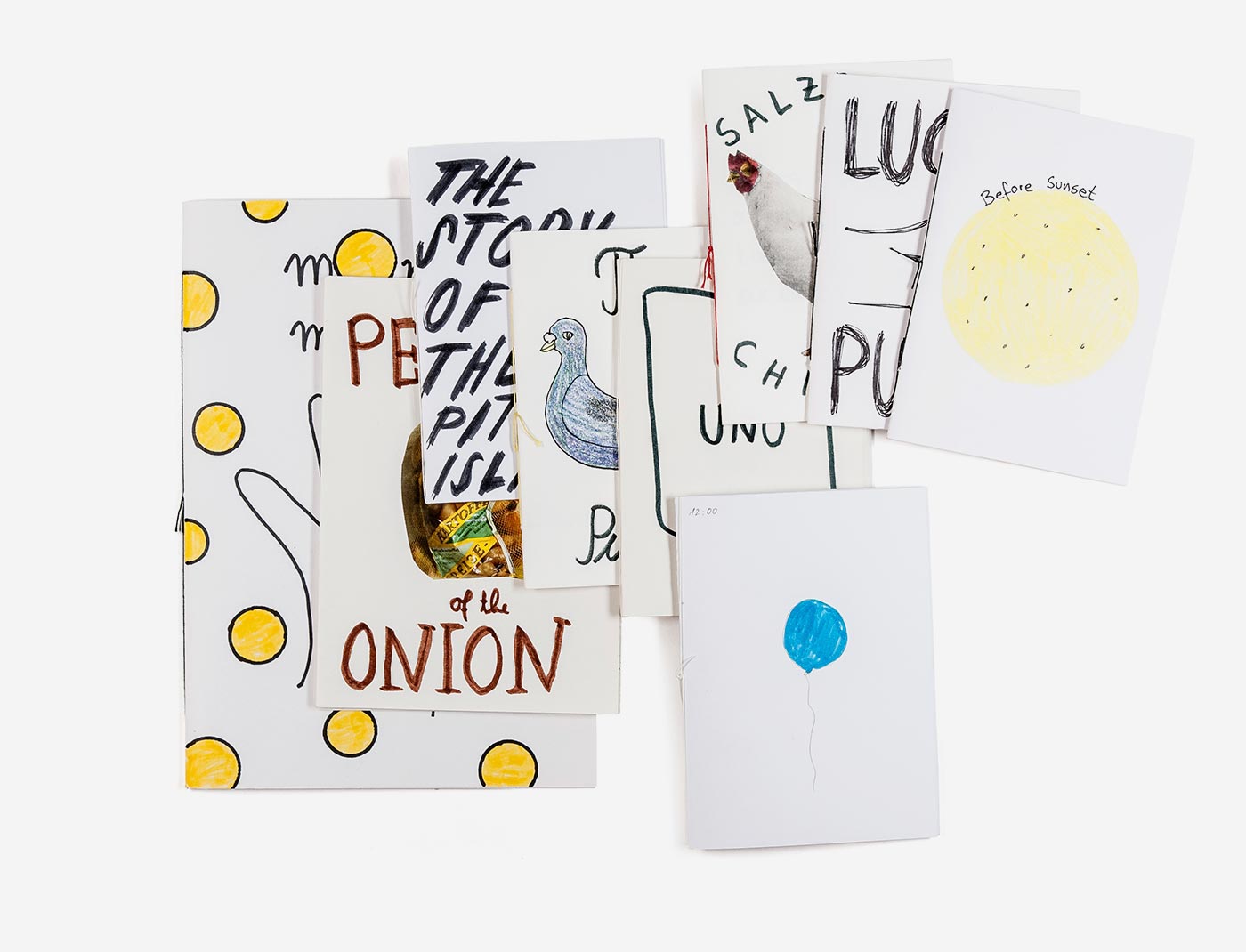 
The One-day publishings are a series of hand-written and hand-copied notebooks. They document random visual phenomena and ephemeral actions and are reproduced within one day. 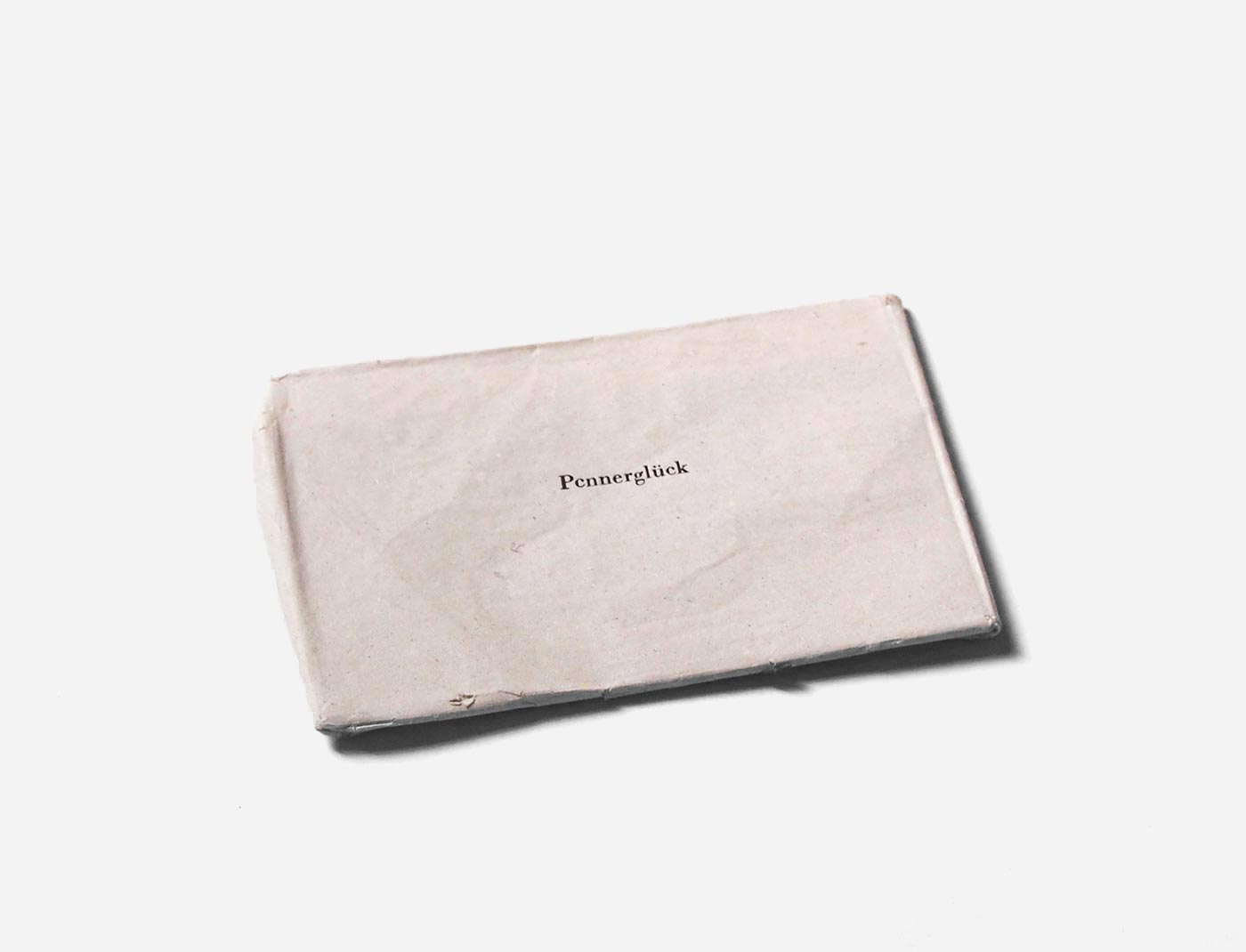 
A wrapped booklet that documents the following action:

“Every day I place a fresh bottle of beer on the same bench.” 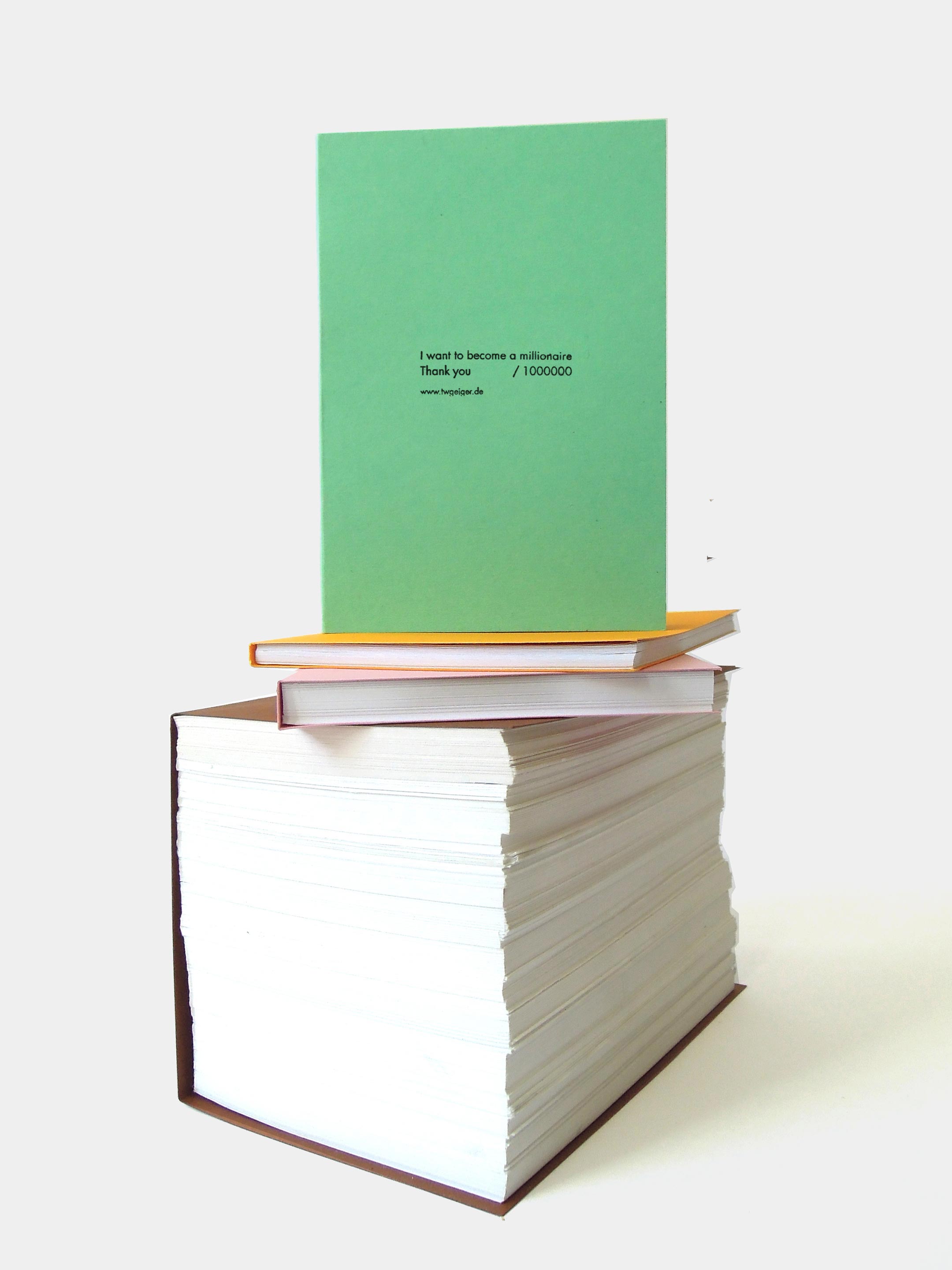 Thomas Geiger
I want to become a millionaire-Sheet books


These books are part of Thomas Geiger's ongoing, economical performance I want to become a millionaire. Since 2010, Geiger offers signed and numbered sheets for one euro a piece. What started as a street performance, became a private funding system to support Geiger’s collaborative projects which are dedicated to public space and publishing: Kunsthalle3000, The Festival of Minimal Actions and Mark Pezinger Books. These books contain 10, 50, 100 or 1000 of Geigers signed sheets.


Bounded books with various amounts of stamped and signed sheets, each a unique